Making News: Earning coverage in national news media was never easy. Today it’s harder than ever GET IN TOUCH

How many pitches does it take before you know a pitch is ineffective?  If you’re a PR pro working for a corporation or organization, trying to pitch your client’s story to major national media, unless that pitch is perfectly targeted, it can take a huge number of tries before anything happens – and even then, it will be a very tough sell, especially now.

At least those were the thoughts expressed by a distinguished panel of news reporters and editors from some of America’s most prestigious news publications in a June 25 webinar organized by Lumina Communications to explore the challenges of securing national publicity and our current news environment.  The panel included Gerard Baker, Editor at Large of The Wall Street Journal, Eric Savitz, Associate Editor of Barron’s, and Brenna Goth, Southwest Staff Correspondent of Bloomberg publications.  John Furrier, Co-founder and CEO of SiliconANGLE Media hosted the discussion. 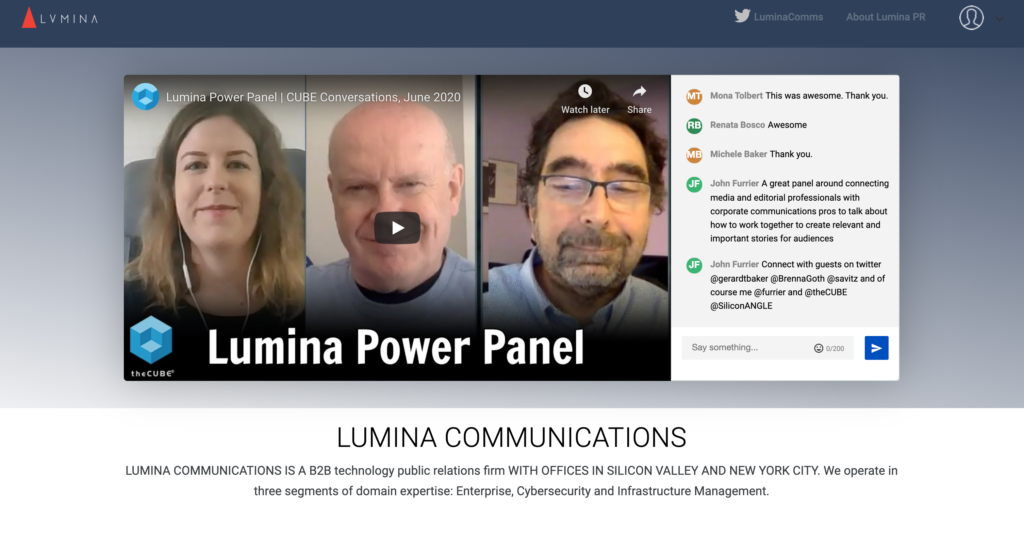 Convincing a national news reporter or editor to consider a client’s story is particularly difficult at this time when the pandemic, its resulting economic dislocation, protests over racial justice, and a presidential election are all taking place at the same time.  Each is a major story.  Taken together, they effectively form an eclipse of many other normally worthy stories.

However, if the story your client has to tell is both newsworthy and legitimately related to one or more of those stories, it may catch an editor’s eye.  But there’s an awful lot of competition.  Eric Savitz noted that there are approximately six PR professionals for every journalist in America.  Trying to get noticed through the resulting crush of news releases, emails, phone calls and social media posts can be tremendously difficult.  But if you have followed a particular reporter’s work over time, and particularly if you’d begun to build a trusting relationship with that individual in the past, there is a greater likelihood of success, although no guarantees.

Other observations offered by the panelists include:

← COVID 19 communications: how to talk through the current pandemic Public Relations in the Digital Age →